Investment from BioCity will cover construction costs of a mobile production unit, enabling Deep Branch to demonstrate their technology using live industrial gas streams and demonstrate the high impact-potential to those in carbon-intensive industries.

Founded in July 2018, Deep Branch Biotechnology has been identified as a frontrunner for viability and potential. Named as one of the world’s top 500 deep tech start-ups by Hello Tomorrow in October 2018 and top thirty 2019  cleantech companies by Cleantech Innovate. Founders Peter Rowe and Rob Mansfield were named as part of Forbes’ European 30 Under 30 in Manufacturing and Industry in 2019. They have received invitations to speak at illustrious events, such as the upcoming 2019 “Seeds & Chips” food and innovation summit, an event that regularly boasts keynote speakers such as Bill Gates and Barack Obama.

Deep Branch is the latest graduate of the BioCity Accelerator Programme to receive funding after working closely with the in-house venture development specialists; who support hundreds of entrepreneurs in creating robust and scalable businesses.

The seed capital investment marks the twenty-sixth investment made by BioCity, further extending their portfolio of life science ventures.

Dr Imelda Juniarsih from BioCity, said: “We were impressed with the potential this new technology has on reducing global emissions. Investing in very early stage companies is a priority for BioCity. We invest in young companies to support the development of new technologies which we think could have real impact.”

“We were also impressed with the Deep Branch co-founders and what they have accomplished in a relatively short time. Scientific lead, Bart Pander, has deep knowledge of gas fermentation, commercial lead Pete Rowe brings expertise in innovation management and operational lead, Rob Mansfield has extensive experience in successfully executing synbio projects. Together, they are a powerful team.”

Peter Rowe, Deep Branch CEO & Co-founder said, "We view the next phase of our development as pivotal to the success of Deep Branch. BioCity have already supported us in many ways on our journey, but this significant financial backing will enable us to take our technology out of the lab and into the real world." 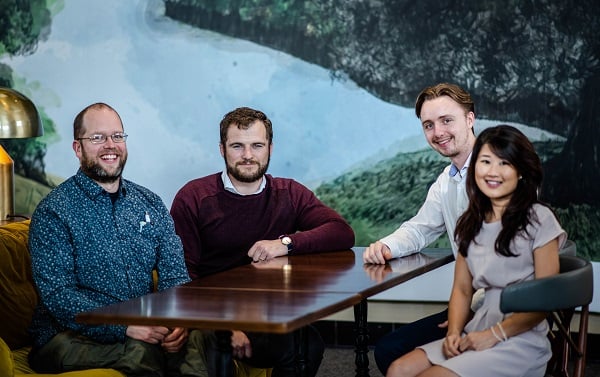 About BioCity
Home to more than 200 companies, BioCity is a pioneering life science incubator and business collective. Where ideas become reality, investment flows and businesses succeed.

Founded in 2002 by the University of Nottingham and Nottingham Trent University, BioCity originated in a former BASF Pharma research facility in Nottingham city centre.

In 2012 BioCity acquired the MSD research facility in Newhouse near Glasgow to create Glasgow, BioCity. This was closely followed by a second site in Nottingham, MediCity, which is located on the Boots campus and is a collaboration with Walgreens Boots Alliance. In 2016 the Newhouse site was further expanded to create Glasgow, MediCity. BioCity also operates at Alderley Park, in Cheshire, Newcastle and Aberdeen.

The company has made twenty-six investments in early stage companies and has delivered healthy growth in portfolio valuation. Funds are deployed from its own cash reserves and from a joint venture vehicle with AstraZeneca which BioCity manages.

In 2017, BioCity was identified as one of Europe’s fastest growing companies in the Financial Times’ FT 1000 report. The BioCity model of ‘support from inception to incorporation’ initially challenged the industry standard but quickly became the industry leader due to the unprecedented survival rates of BioCity based businesses. For more information visit https://biocity.co.uk/about

About Deep Branch Biotechnology
Deep Branch Biotechnology is developing scalable technology aimed at transforming the polluters of today into the producers of tomorrow. We generate clean, nutritious and sustainable single cell protein directly from carbon dioxide in industrial waste gas, thereby reducing the carbon footprint of emitters and providing sustainable alternatives to soy and fishmeal for the feed industry.

Deep Branch Biotechnology is based in Nottingham (UK) and was founded in 2018. Previously, the founders have worked on projects ranging from developing new CRISPR-based genome editing system, to generating jet fuel from steel mill waste gas, to preventing the killing of billions of male day-old chicks. Deep Branch Bio have come through BioCity’s business accelerator programme, which helps take companies from ideation to full commercial launch.  For more information visit https://deepbranchbio.com/