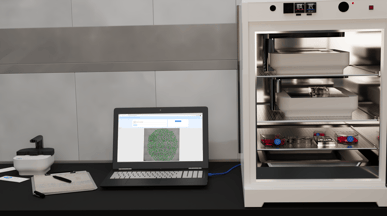 CytoSMART Technologies, an Axion Bio company, today announced the launch of a new Organoid Analysis Module for use with its flagship CytoSMART Omni live-cell imaging product line. The innovative software module, which incorporates next-generation machine learning capabilities, is designed to meet growing scientific demand from researchers and drug developers using complex three-dimensional (3D) in vitro models such as organoids, spheroids, and tumoroids to study disease mechanisms and identify therapeutic targets in the fields of neurology, gastroenterology, oncology and more.

According to Joffry Maltha, CEO of CytoSMART Technologies, the Organoid Analysis Module reflects the company’s commitment to provide customers with cutting-edge tools to accelerate scientific discovery. “The use of organoids in research is allowing scientists to understand a variety of diseases in novel ways and pursue therapeutic strategies more quickly than ever before. While imaging is a cornerstone of many experiments, analysis is often a hurdle. Our new software promises to provide fast, accurate results and give organoid researchers access to the Omni’s automated whole-well imaging capabilities. We look forward to seeing the discoveries it enables as the field continues its rapid advances.”

Organoids are at the forefront of discovery and represent a bridge between two-dimensional cell cultures and more complex animal models. Often generated from stem cells, organoids have transformed research by allowing scientists to create miniaturized versions of organs in the laboratory that mimic many of the biological processes observed in humans. Normal biological processes remain undisturbed inside an incubator during experiments with the Omni’s label-free, whole-well brightfield imaging, making the technology especially valuable for scientists studying long-term therapeutic effects, disease progression, or developmental biology.

CytoSMART Technologies is a specialist in the development and manufacturing of live-cell imaging systems for life science laboratories. The company was founded in 2012 by a team of biologists and engineers who were convinced that a new generation of miniaturized microscopes, powered by artificial intelligence for image analysis, would allow biologists to make discoveries more efficiently and at scale. In 2018, CytoSMART was selected by Microsoft for its prestigious ScaleUp program. CytoSMART’s microscopy solutions are used in research laboratories worldwide. In 2022, Axion BioSystems, a US-based life sciences tools company focused on advanced live-cell assay systems, acquired CytoSMART Technologies. Both companies see large synergies to accelerate further growth together. CytoSMART Technologies is headquartered in Eindhoven, the Netherlands, and has more than 50 employees.
www.cytosmart.com

Axion BioSystems is a leading life sciences tools company focused on innovative live-cell assays used to study the function of cells in vitro for drug discovery and disease modeling. The team at Axion BioSystems is dedicated to continuing the advancement of new technologies that accelerate research and further the understanding of biological complexity outside of the body. Axion BioSystems is headquartered in Atlanta, Georgia, USA, and has offices worldwide. Axion has more than 150 employees across its current locations. www.axionbiosystems.com