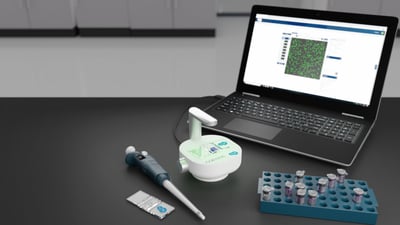 Said Joffry Maltha, CEO at CytoSMART Technologies “The 3D cellular structures that are formed in organoids have great potential in drug discovery and developmental biology. This has fueled the ever-growing interest in culturing new sub-types of organoids and optimization of current protocols. Growing organoids does however take a substantial amount of time and skill. We believe that implementation of an automated solution for organoid counting can really speed up day-to-day work in the lab and is a logical step towards further implementation of organoids in cell culture-based research.”

Manually counting organoids is a routine part of laboratory operations but is time consuming and user dependent. To overcome these issues CytoSMART has introduced an organoid counting application – a new, powerful, and easy-to-use software application which enables organoid counting with the Corning® Cell Counter.

The main features and benefits of the CytoSMART Organoid Counter are:

About CytoSMART: CytoSMART Technologies specializes in the development and manufacturing of smart microscope systems for life science labs. The company was founded in 2012 by a team of biologists and engineers who were convinced that a new generation of miniaturized microscopes, powered by artificial intelligence for image analysis, would allow biologists to make discoveries more efficiently and at scale.

In 2018 CytoSMART was selected by Microsoft for their prestigious Scale Up program.

CytoSMART’s microscopy solutions are used in over a thousand laboratories around the world.